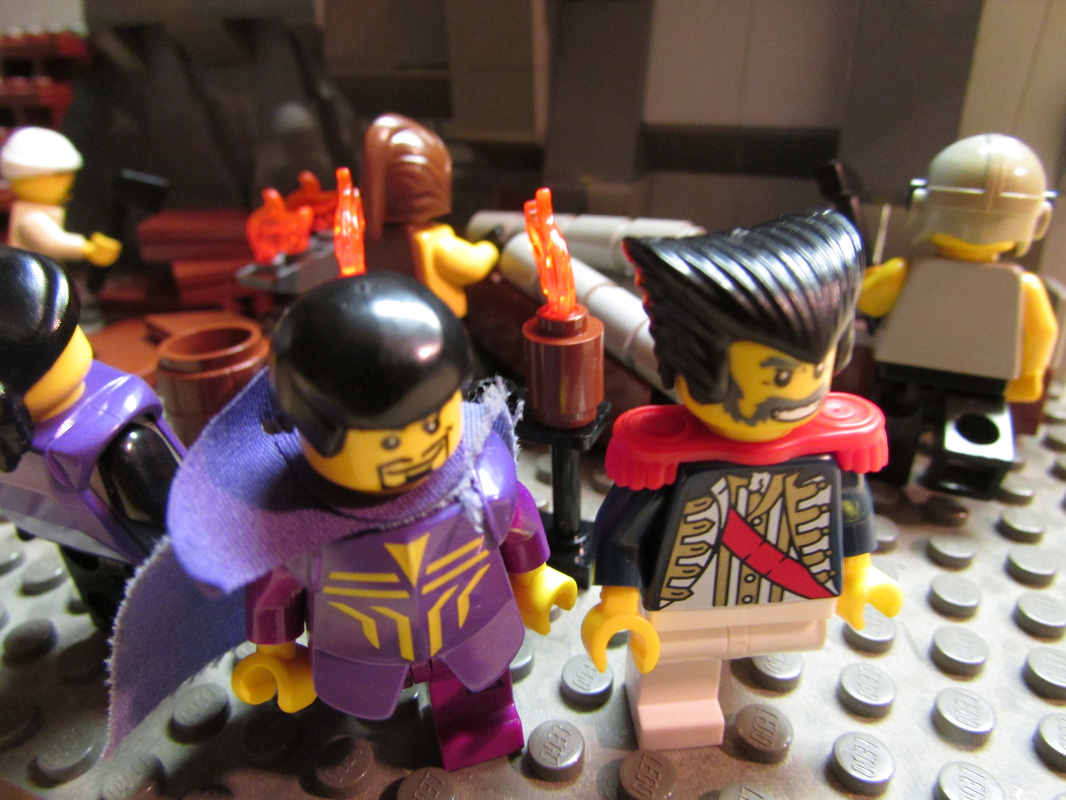 “I see,” Gentler responded. “It is well designed, the series of stops and checks.”
“The gold will not be easy to access, as it shouldn’t be.” Damon added as he surveyed the vault with the two lords.
“No, not in the least. Now that the movement of capital into the city is finally a reality, I will be sharing all movements with you Gentler. Security will have to be at its finest, and secrecy must be assured. We don’t want the Shadow Fox to know about this.” 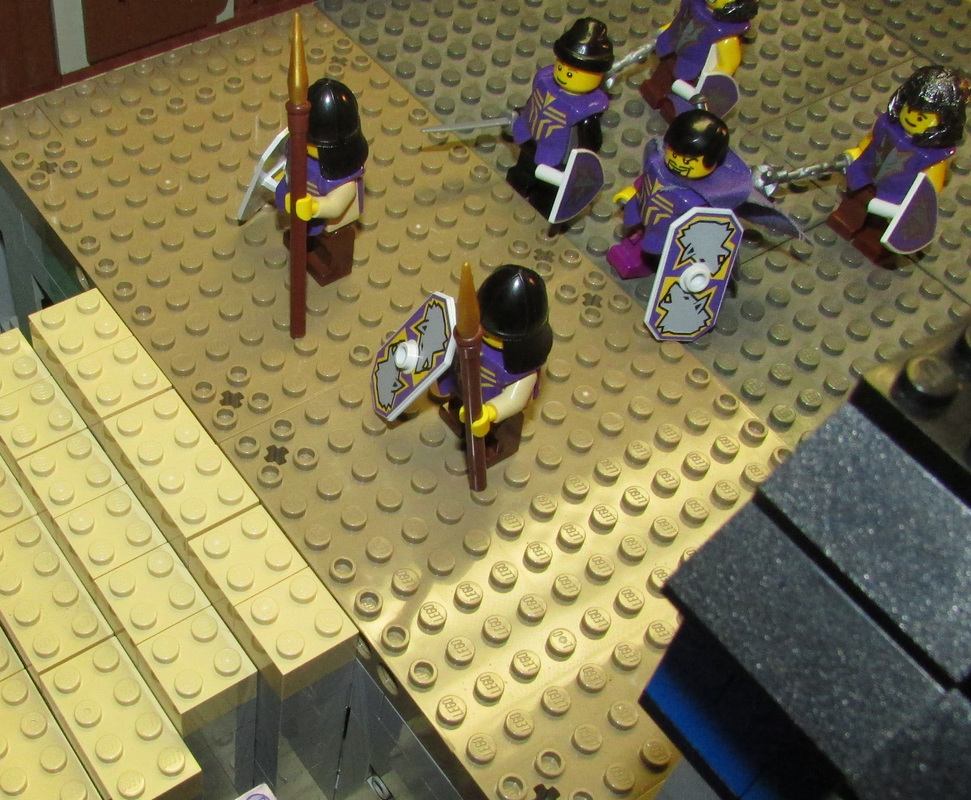 Gentler’s guards led him from the vault back to his tower through center city. The sun was just beginning to set and the city was disturbingly still, though it was not empty. Center city had stopped to watch them pass through. 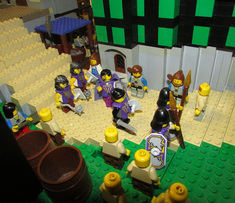 “You look well, my lord,” a man yelled.
“Eating well, milord?” another chimed in.
They were heckling the grandmaster, who stopped to address them. “Good day sirs. Have you something you wish to address?” The crowd was silent, still. “Very well then, subjects. I assure you we are doing everything we can for you and will continue to try our best.” He turned to walk away from them when a stone, ever so small, struck him in the back of the head. He turned and drew his sword as his subjects charged on him and his guards. 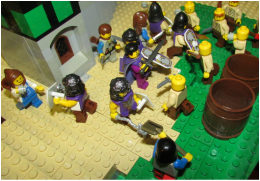 Damon Stien came forward and charged at the assailant nearest to Gentler. The two fought back to back. As their attackers came at Damon, he swiftly maneuvered his way around them, landing perfect killing blows on the follow-through. Gentler took a defensive stance with his shield held high. As Gentler blocked blows from clubs and stones, Damon flanked around the grandmaster’s attackers and cut into them from behind. He was narrowly ducking under what would be devastating blows and rising with his sword lodged deep in the bellies of his would-be executioners. 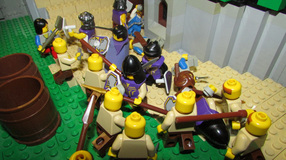 Damon’s fellow household guards were not as fortunate as he was. As he surveyed the square, he could see many of them had fallen. Perciv, a young guard the same age as Damon, lay in a crimson pool that flowed from his head. Refocusing, Damon took immediate action to protect Gentler’s person. He cut a path to the grandmaster and again the two were back to back. 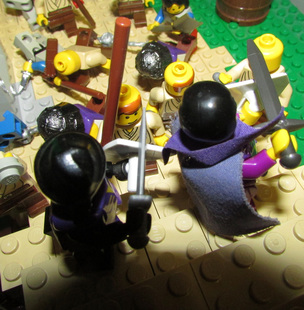 “We must withdraw, my lord. Several of us have fallen.”
“Agreed,” he yelled, kicking away an incoming foe whose attack he had just parried. “Or at least converge with the city guard. They should be arriving soon—surely a riot of this magnitude caught their attention.”
“We need a high point then, so they will be easier to beat back,” he replied, while removing the head of the man in front of him.
The two continued to fight through the mob and attempted to regroup with what few guards they had left among them. Together they headed uphill, back toward where they came from. Only Damon and Gentler made it to the top. The mob was relentless in their rage, running uphill, and had almost completely converged upon them, when arrows flew in, feathering the leaders of the pack. 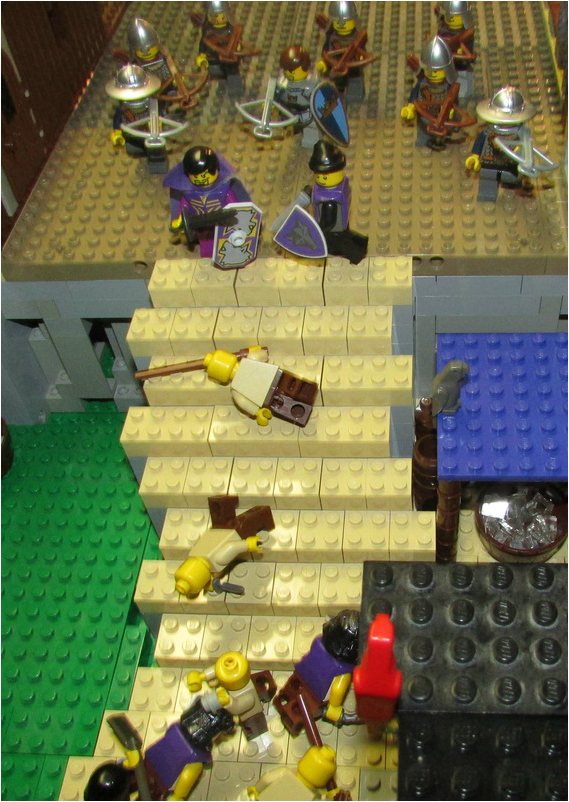 The mob, looking upon the coming city guard led by Ser Ruf Radivan of the Royal Knights, changed direction, and like a crashing wave, withdrew back into their sea. The city guard pursued, shooting down a few more and chasing down whom they could.
“Lord Leones! Are you alright, my lord?” asked Ruf.
“I am not alright. To be attacked in our city by our subjects? What has the capital come to?”
“This was no accident,” Damon added. “The men who orchestrated this, they were watching us. The men who were the ones to yell to you and first attack you, I recognized them. I saw them earlier when we were going to the vault. After the fighting ensued, they withdrew. I know because I looked for them when the fighting first broke out. This was the Shadow Fox. I believe so, at least.”
Gentler, still hunched over and catching his breath, slowly rose, with a scowl of disgust. 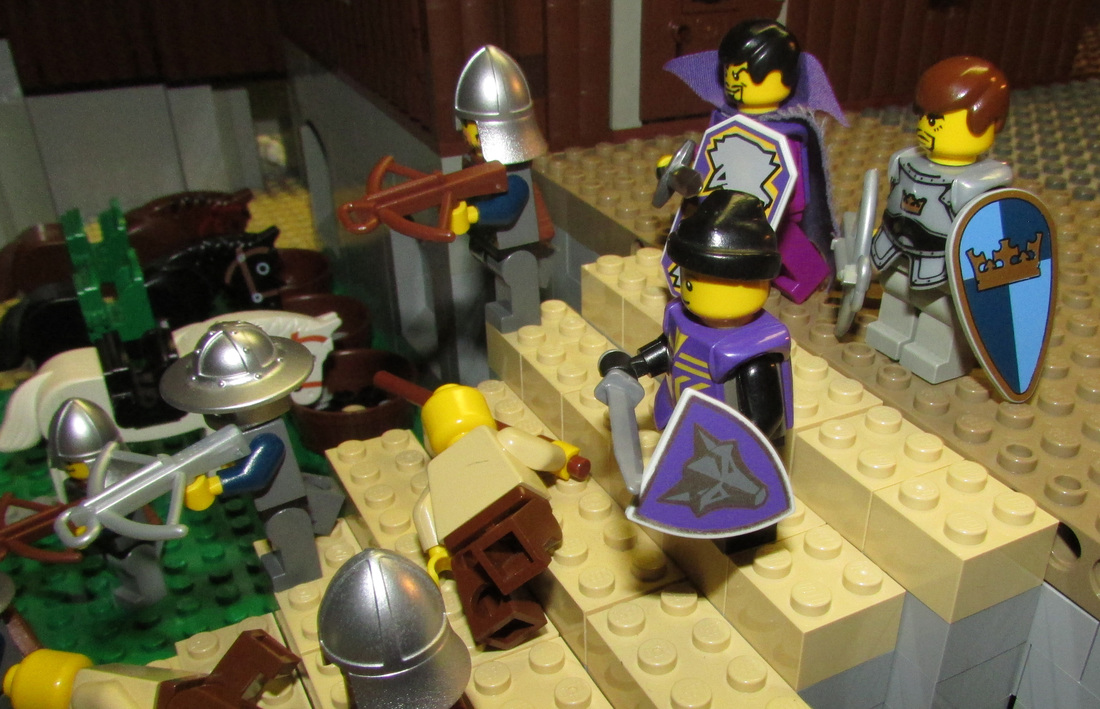 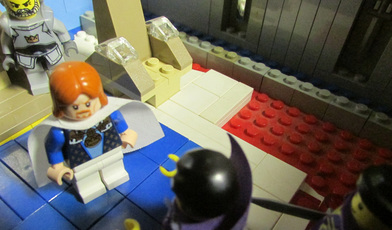 Upon returning to Stallworth Keep, Gentler requested an emergency meeting of the council, although High Mage Sissold was still in Isseaos. Stanley was absent from the meeting, still in center city managing security for the bank, but King Daerunt and Ser Dyard did attend.
“Gentler, I’ve heard of your troubles in the city. It is good to see you safe, my friend,” the king said, placing his hand on Gentler’s head.
“Thank you, Your Majesty. It is my belief that the mob attack was orchestrated by the Shadow Fox. I think it was a deliberate attempt on my life.”
“And what would make you believe that?” Ser Dyard asked.
“The men who started the riot were seen following me earlier in the day. They gathered the mob and picked their moment to attack. It was no chance happening. We must take immediate action.” 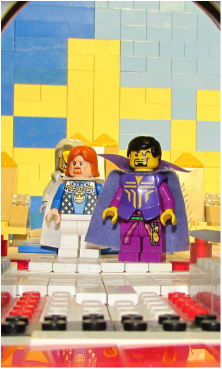 “And what immediate action do you suggest we take, Grandmaster?” Daerunt’s eyes wandered downward. “Did you forget they have made attempts on my life as well? We are already doing everything we can.”
“Then we need to do more.” Gentler’s face grew hard at that point. His anger was not easy to hide.
“I will send a rider to Isseaos at once to retrieve Sissold.” Daerunt assured him “When he returns we will discuss some changes. Until then, triple the guard you take with you in and out of the city and keep your business there to a minimum. I’ve grown tired of these Shadow Fox.”