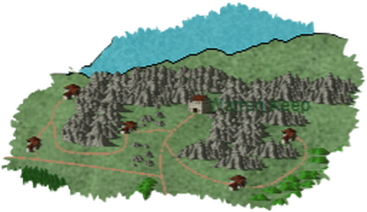 House Aleer, known as the executioners, is a house of bloody beginnings. Edward Aleer was originally executioner to King Dante Lagrest.  It was one day when the King asked Edward to join him on a hunt, a hunt in the Bear Mountains.  The King had grown tired of hunting boar and stag and looked for a true challenge, he wanted to hunt a bear.  But when the King came upon a bear in the mountains he was thrown to the ground and it looked as if he would meet a bloody end, when Edward, it is said, killed the bear with just his bare hands.  After that King Dante named Edward Lord of Bear Mountain and Warren Keep, named for Edwards Father, built by Joven Leones to serve as his seat of power.