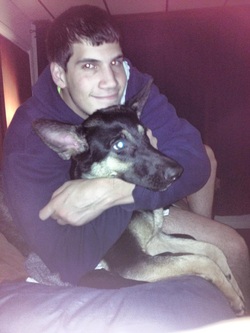 Hi! My name is Daniel Ravenda.  I have been writing since I was literally five years old and it is the only thing in the world that makes me happy, even though it is actually very difficult to do.  I work as a middle school teacher but do a lot of writing on the side.  I look at writing as a hobby but also a secondary source of income.  I write everything from children's books to fantasy novels. I'm very into sports and live music.  Current projects I'm working on include:

The Prefix Pelicans: A picture book geared towards teaching children about prefixes.  The story is currently complete and fully illustrated, we are seeking representation to get the work published and put out there as a resource for young learners and teachers alike.

The Fawning: A graphic novel/ comic series based around Jason Richards, an ex-cop with  mysterious mystical powers who has just returned to his home city of Admiral after a 10 year hiatus in order to develop a relationship with and raise his younger brother.  Upon his return home Jason finds that the corruption of the police force that initially drove him to step down has spread throughout the city and organized crime dictates right and wrong.

The Ruinous Chronicles: Smoke Rising: As Daniel Stonevien, a hotheaded young fire mage, languishes in a dungeon waiting to be executed, he recalls the fateful evening he decided to leave his family and seek adventure. Little does he suspect that the quest he’s about to embark upon will try him more than dragon’s fire.
Smoke Rising is an intricately plotted fantasy novel, the first in a series, in which Daniel is one of several characters embroiled in the fate of Ruinous, a kingdom under siege by the mysterious Shadow Fox. In the capital, Stallworth, Gentler Leones and his personal guard Damon seek to sniff out a traitor, while Daniel’s childhood friend Link desperately tries to keep his charge, King Daerunt Danford’s son Domino, Ruinous’s prince, safe. At Isseaos, the academy for mages, teenage Keliea contends with a traumatic past as she helps to lead an exploratory mission and learns about her extraordinary power. In the Startelm, a forbidden forest, an ancient enemy reappears, and Avey, an Alsatin (an intelligent non-human creature), wonders how much her unusual father is hiding from his pack. Further afield, prodigal youngest son Stephen Gaferty must decide if he has what it takes to lead his family’s house in a dangerous political game. Meanwhile, Daniel attempts to infiltrate the Shadow Fox, leading him on a dangerous journey through the Sea of Sand and toward the realm of the Nocturne, a fanatic cult whose country no stranger has ever left alive.

Smoke Rising will be published digitally, in print, recored and narrated with professional quality audio, and be available here to read with full Lego Illustrations.  This is my primary project so the vast majority of my time is spent working on this.


Short Poetry Books:  I have written three short books of poetry already that are available here and will eventually write more.  Currently the vast majority of my time is spent on Freedom in the Lie, the Lego art, and the Fawning.  I'm very temperamental with writing poetry as well so it's not usually something planned, if it happens it happens,  I don't go out of my way to write poetry.  As for the current works I have, I am actively seeking publication for them.