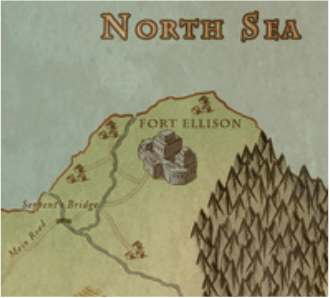 In the northern part of Over Pass Mountain sits Fort Ellison, the ancestral seat of House Gafarty. The Gafartys are a house as old as the Lagrest and one of the three original Ruinousian houses.  Fort Ellison was built as a first line of defense from the Pegasus, being positioned perfectly to defend from the northern sea and from the Serpent's River. From fort Ellison, Garth Gaferty repelled countless attacks from the Pegasus in the sea and on the river, never once allowing Pegasus men to set foot on Ruinousian soil.  Having gained a reputation for calculating when the best time to strike his enemies was and having a knack for staying hidden until the opportune time to strike arose,  Garth took for his sigil the snake and  his word became "strike with purpose".