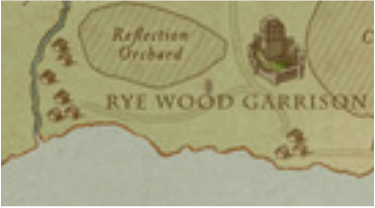 The Leones origins come from humble beginnings.  Joven Leones was a simple stone mason who's work ethic caught the eye of King Dante Lagrest.  King Dante, curious to see the indignity of Joven and needing a place to garrison troops in the south, tasked him to build a keep in the Rye Wood.  Joven was given a small budget and no men, but he inspired men to work with him for the glory of the king and Ruinous.  Joven cleared miles of land in the middle of the Rye Wood and erected the Rye Wood Garrison.  Afterwards King Dante was so impressed that he named
Joven the lord of Rye Wood Garrison and gave him men to man his castle and lands for the men who helped him.  Joven took for his sigil the wolf because his crew of builders and masons were always referred to as his pack.