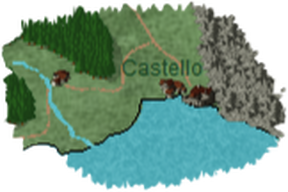 House Greystock is the youngest house in Ruinous, only recently coming into power.  Aron Greystock was a Royal Knight serving under King Daerunt when House Castello was plagued with a disease that wiped out their entire line.  Daerunt first offered the lands and titles of Castello to Dyard Graniteworth but when Ser Dyard refused he gave them to Aron Greystock along with five thousand men that would be sworn to his house.  Castello sits in the most southern part of Over Pass Mountain and is surrounded by the mountain on one side and the sea on the other, making for a perfect defense.