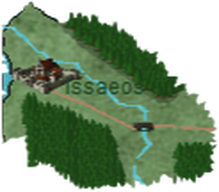 House EndaUre owes its existence entirely to house Nands.  Issaeos was originally built by Edric Nands for the purpose of training mages to be used in the royal army.  Mages were not common in Ruinous, however, so Edric employed the services of Jinzo Endaure, a fire mage from the great sea of sand.  Jinzo served Edric, traveling throughout the souther continent finding slaves who possessed the gift of magic and bringing them to Issaeos to be trained.  In time Jinzo was made head master of Issaeos and given three thousand men from the Nands to man his castle.  Upon his death Jinzo's son Kerbo inherited the position of head master and in honor of his father was granted a lordship.  The Enduares were not given much land but they were given dominion over all mages in Ruinous.  High born or low the Endaures had the right to any children born with the gift and were tasked with making sure there was a mage in every household to serve and council the other lords.