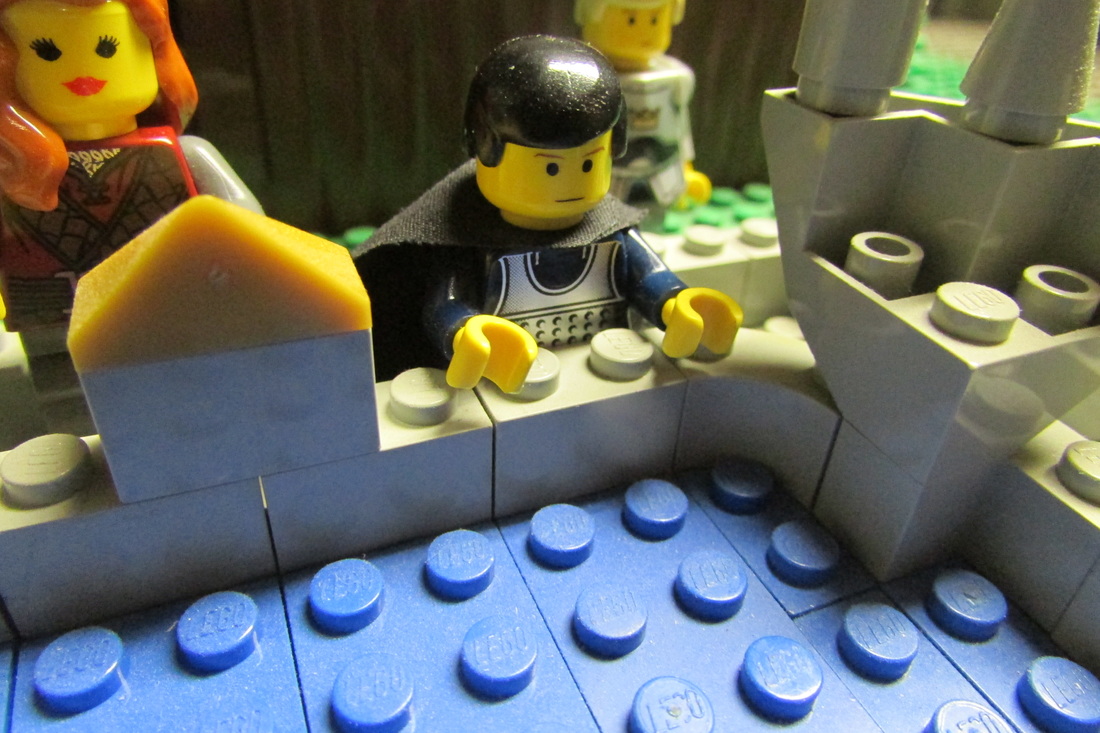 He looked on as the tiny prince attempted to manipulate the water in the courtyard’s fountain. He was nearly 7 years old, the age magic typically comes to mages, but still Domino had not shown any signs of being a magic-wielder. He worked with a tutor, Nottoc Fern, a water mage who had returned with the king two weeks ago after his last visit to Isseaos. The king thought that having a mage on hand to guide the prince would accelerate his abilities. Sadly though, in Link’s eyes, it was becoming apparent that Prince Domino would not grow to be the great mage his father was.
With his water magic, Daerunt was able to slay the dragon Gigalith during the Pegasus Civil War. His might was of legend and he had high hopes for the might of his son after him, but Link felt that Domino did not need to be a mage in order to be a great king. He had in the past pushed for Daerunt to focus more on his son’s academic studies rather than his magical ones, but little had changed. Every day he escorted Domino to the courtyard, and every day he watched him try and try and try to tug at the water, and every day he watched the boy fail. It was beginning to wear on the prince. He was, after all, only a boy, and how much pressure could he take? How many times could he fail before failure became all he knew? 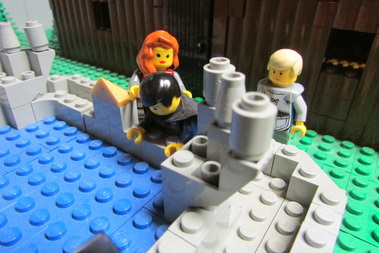 “Almost got it,” Nottoc chirped to Domino in a soothing manner. “Hmmm. Your form may be a little off. Why don’t we, er, um, I don’t know—take a break for today and just study?”
“Okay, Mistress Nottoc.” The prince nodded, running off to grab his books.
“Please, Your Highness, plain Nottoc is fine.”
As the prince ran off Link could see the aggravation in her face. She knew it was only a matter of time before the prince’s failure caught up with her and she would be sent back to Isseaos. Link found the mage to be quite interesting, although they had never talked much. She had a very gentle face and smile, and her eyes were a calm shade of jade green. He thought it a nice contrast to see another person with lighter eyes, like his own. Most in the capital were dark of hair and eye. Link’s eyes and hair were light, and Domino had the blue eyes of his mother, as well as the blackness of her hair. Nottoc, though, had hair in-between, an auburn brown that shimmered in the light and set a bright spot across the sky in the dark. 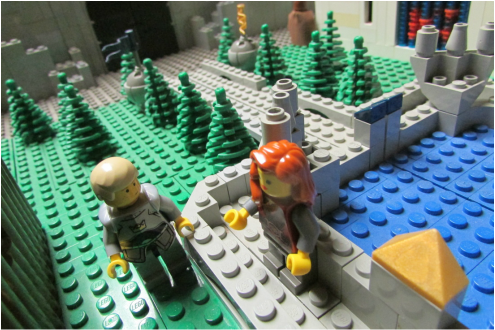 “I don’t think he’s going to get it, you know,” Link said, approaching the frustrated instructor.
“No, Ser Knight, I do not think so either. Our young prince is having a difficult time. I have instructed young mages for a couple of years and never saw anyone like him.”
“You fear the prince is lame?”
“Yes I do. But I don’t know what to do for him. The king commands that I keep studying with him, showing him form and technique, teaching him the principles of magic. He said one day it will simply come to him. So I just teach him and wait.”
“I suppose that’s good for you, though. You’ll get to stay here after all.”
“Yes, I do like it here. It is quite lovely. The streets are a little rough, but I’m able to handle myself. Much better than back at Isseaos, anyway.”
Isseaos. Link remembered it as the place Daniel went to live seven years ago. The magic academy. He had heard that his friend had since come into trouble there, but didn’t know what had become of him.
“Do you mind if I ask you something?”
“Not all,” she responded. “Please ask.”
“At Isseaos did you know a boy named Daniel Stonevien?”
“Why yes I did, everyone knew him. Did you not hear about what he did?”
“I heard he got into something with the Endaures, but I am not privy to all the details.”
“He nearly killed Lord Itro’s son, Mako. Apparently he just went off and attacked him, completely unprovoked.”
“Unprovoked? Why would he do that?”
“Well, some people say the two had bad blood for each other. I didn’t know him that well, so I couldn’t tell you. Daniel mostly kept to himself. He was a lot older than the mages he was being trained with. He and another freed slave kept to themselves, didn’t fit in with the others.”
“Why was he so far behind?”
“Well he wasn’t, really. It was rumored around campus that he was actually the most powerful fire mage at Isseaos, rivaling even Itro, but he so was far behind in his technique and principles that he could never catch up academically. So while he may have been brilliant in one regard, he was lame in the others. When you study as a mage, magic is only part of the training. We need to be well rounded and educated so we can best advise the Lord of Ruinous.”
“That role wouldn’t have suited him very well.”
“Wait, did you know him?”
“Yes. Before the war we were friends. We grew up together, and you know what? He couldn’t use magic until he was about 13, now that I think of it, so I suppose there is hope for our prince.”
“Oh. I’m so sorry to tell you this then, but he was executed for the attack. It happened just before I left to come here.”
“Executed?” The word stuck in Link’s throat. He could scarcely pronounce it. Daniel ... executed. Why hadn’t Daerunt told him? The king knew of their past. Did he forget? He couldn’t imagine it. He couldn’t accept it.
“Yes, I’m very sorry.”
Her voice cut through his concentration. “Yes, well, it has been some years since I’ve seen him. He would be a stranger to me now, but still.” 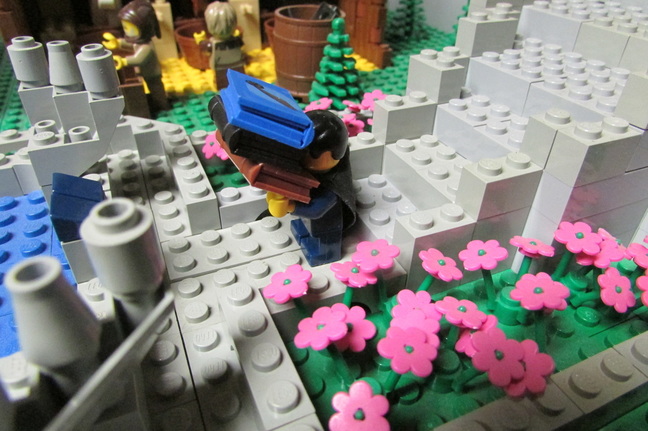 The prince returned with a mound of books piled up to his nose, ready to study. Domino was a keen student, especially considering his age. He liked to learn things, just as Link did. He and Nottoc spent the remainder of the afternoon studying elements and how they interact with one another. She taught him how opposite elements are meant to balance out one another, how the wind and water interact and form the ground. Although she had modified the difficulty of the subject to suit a child, it was still fascinating. It was not enough to take Link’s mind off of his lost friend though.  He tried to immerse himself into the lesson, so that he may act as a resource to the prince in his studies, but he spent most of it pacing about and reliving the past.
For a moment he was a boy again back in Calafrack returning home after a long game of “Kill or Capture” with Michael and Daniel.  The premise was simple, you’d run around the woods trying to hide from the “killer”, they would set boundaries of course.  The “killer” would have to hunt down the other players, if he tagged you you’d be dead.  The other players, called the “trappers” would have to hide from the killer and try and lure him into one of their traps.  It was like a game of cat and mouse, Michel always won though.  If he was the killer he was too fast to run away from and too smart to trick into a trap.  Link later found out that his strategy was not to rush into the hunt but rather he would watch Link and Daniel, to see where they planted traps.  If he was a trapper he would do the same, watch the killer and use Link or Daniel to lead the other on a chase, while he set traps behind them.  Link was a good trapper, he always thought outside the box and loved the idea of strategy.  Daniel was not so good, he preferred to be the killer most times, though he would just wildly chase them down.  Sometimes he would catch Link, never Michael, but mostly he just fell into the same traps over and over again.  Daniel was like that, if he fell for something once he’d always fall for it. ​ 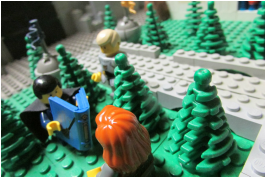 When the lesson concluded at six o’clock, Domino’s washer came to get him as dinner was approaching and the prince needed to be cleaned. It gave Link a brief break from watching over the prince, as Ser Nalco Peavey was stationed to watch over the Royal Bath Houses. As Domino went off, the mage came back to Link. 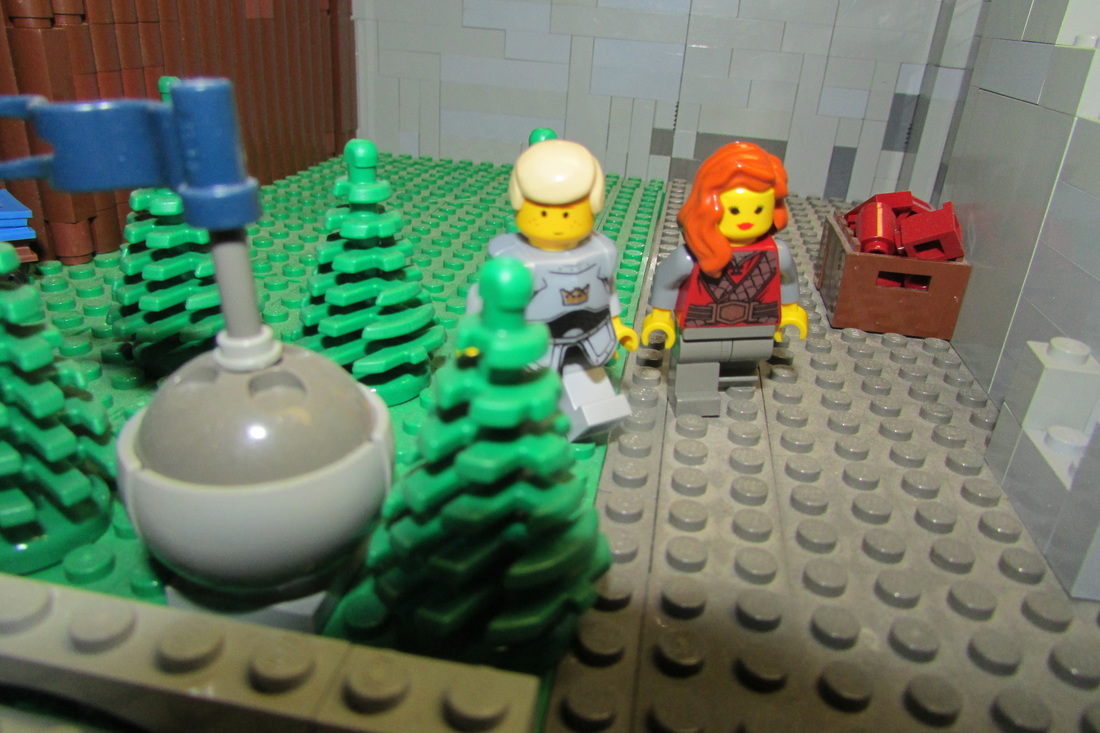 “I’m sorry again about your friend, Ser Knight.” She paused, and then asked, “What is your name, if you don’t mind me asking?”
“Oh, how rude of me. I am Linkoln, Ser Linkoln Gondev, but please call me Link.” He bowed slightly.
“Thank you, Ser Link. So what do knights do when they are not serving a prince?”
“I am sworn to protect Prince Domino at all times, and scarcely do I get time to myself. When I do, I simply use it to sleep.”
“Well you can’t be that busy, since you’re free now.” She was right; Link was always free during the prince’s bathing and meals. “Would you care to join me for supper at the Lazy Inn? It would serve me well to have some company, since I don’t really know anyone here yet.”
Link could have gone with her. He even wanted to. But something was telling him not to, that he shouldn’t. There was nothing improper about the invitation; it was just dinner, and he had eaten at the Lazy Inn many times before, although he was not really a fan of the place. He even recalled seeing Nottoc there eating by herself just last week. He wanted to say yes, wanted to go, but instead he decided it was better to eat in the kitchen that night, and gave Nottoc his excuses.  She respectfully accepted his declining of her offer, likely figuring the news of his now deceased friend was weighing heavy on his head.  She wasn’t wrong after all